A day in the life of a data scientist is, at the very least, multi-threaded (in terms of task processing, that is). Not only do they deal with several internal stakeholders to get their ideas through, they are also required to ensure their machine learning models are adequately trained in the requisite volume and dimensionality of data. Even more so, we may add, if Deep and reinforcement learning is at play.

Computer storage has followed Moore’s Law, sure, but computing prowess that is a prerequisite for Artificial Intelligence model development, has not. And at the core of this problem lies a technology relic from decades ago – The Central Processing Unit. This article aims to make the case of the CPU being closely supplemented by Graphical Processing Units, or GPUs, to accelerate AI model training and deep learning exponentially- something the industry needs very badly today, indeed.

So, what’s a GPU and what’s its role in AI Engineering?

A Graphics Processing Unit is a powerful chipset with multiple cores that facilitates parallel computing of massive datasets for uses of Machine Learning and Artificial Intelligence, unlike traditional CPUs which usually deal with computation tasks in sequence. While most CPUs have limited cores numbering in tens at the most, computational power in a GPU is comparatively massive, running into thousands of cores. How does this matter in AI engineering? Deep learning, one of the foundations of artificial intelligence engineering require parallel processing of massive datasets in order to train neural networks, requiring complex machine learning algorithms (in most cases, these are distributed algorithms working on a single platform for faster training of the AI models). Even sophisticated CPUs are mostly unable to handle this parallel processing given their limited number or cores, ordering the computations in sequence rather than in parallel. GPUs, naturally, replace the processing with far more computational prowess at lesser speeds, completing tasks in minutes that would otherwise take days for even a multi-core CPU to process. 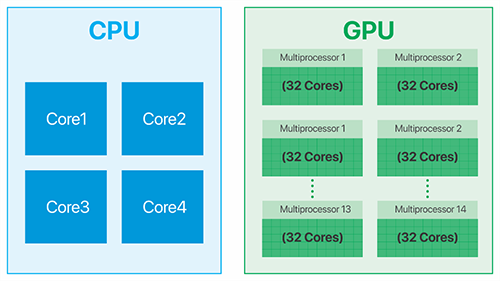 NVidia the pioneer of GPUs in the market and the first to actually release one, the GeForce 256 in 1999, primarily targeted the product toward the gaming industry, for faster rendering and manipulation of images and graphics. The very nature of manipulating multimedia based data required the GPU to be far more powerful than the CPUs prevalent at the time, in parallel processing. Many other players like ATI and Fujitsu have released their own versions of GPUs over time, but almost all were geared towards graphics processing, hence the name. With the advent of AI, the processing power remained, while the functions and purpose simply transformed into processing data, instead of just graphics. Today, GPU servers encompass almost all the datacenters of the world’s largest cloud based AI and Machine Learning based cloud providers.

Latency and throughput form the basis of the advantages that the GPU has over the traditional CPU. A CPU is built with limited cores and is programmed to process sequential tasks with minimal latency, but the throughput, that is, the computation that happens through its cores, is limited. A GPU, on the other hand, is designed to push as many computations through its cores with minimal latency, based on the number of Arithmetic Logic Units in its cores, automatically resulting in vastly reduced latency and increased throughput. While a CPU relies primarily on multi-level caches for storing data during the computation phase, a GPU comprises streaming multiprocessors through its many cores, with a memory controller in the architecture to optimize performance.

Meaning, for the modern AI Engineer

Next- Level multitasking! A datacenter with GPU servers empower the modern data scientist to run multiple complex and distributed deep learning algorithms, through all kinds Neural Networks. Data Scientists and engineers can run multiple algorithms through their GPU servers parallel to each other, all with massive datasets, and still save time and resources on their AI development. Perhaps, the reason why a GPU is the weapon of choice for any AI engineer looking to minimize neural network training time and faster AI development today.

Your Subscription is now active.