The Artificial Intelligence Engineer Career Roadmap - All You Need to Know

So, you want to build your career in the next big thing, actually, the biggest phenomenon to sweep the world since the Internet.

Welcome, but you’re not alone. Millions of aspirants across the planet are gearing up their skills and knowledge, getting accredited and certified in the sexier-than-sexiest career of the 21st century (sorry, Harvard Business Review). So what will set you apart? For starters, knowing what you’re getting into:

What an Artificial Intelligence Engineer Actually Does

"If our era is the next Industrial Revolution, as many claims, AI is surely one of its driving forces."- Fei-Fei-Li

An artificial intelligence engineer conceptualizes, designs, builds and finally rolls out sophisticated machine learning algorithms that facilitate autonomous knowledge gathering through unstructured training sets (deep learning) besides the deployment of the AI models in real-world production setups. AI engineers also set up the basis of intelligent automation processes using proprietary or third-party tools within the enterprise. Other functions include researching and recommendations on improvements in existing machine learning algorithms, SDLC based machine learning implementation on a dataset to train the model, data mining, pattern recognition and training of the AI model, and the training of ML-based algos for domain-specific functions, some of which are already mentioned above.

While these are the core functions, at an entry-level, most AI engineers can expect to start at the bottom rung of the AI/data science ladder with munging large datasets, while also training AI models for various functions including multilayer neural networks, computer vision and other similar human-intensive functions. But it is important to remember, however, that this is just the beginning and has the potential to culminate into a principal or head AI engineer role as your career progresses.

What an Artificial Intelligence Engineer is Required to Know

By their very definition, AI engineers are expected to be problem solvers. Their perspectives need to go beyond the ordinary observations and statistical thinking, logical reasoning and solution. However, education is as important as the soft skills. Typically, a Bachelor’s degree is required in Computer Science, Mathematics or statistics. But what is crucial, however, is the understanding and comfort level with ideating and solving problems in all three. To tabulate:

Note that while your educational background may be in either one or more of the domains mentioned above, functional knowledge of practical applications of all of the above are preferred. You can refer to case studies, whitepapers, research journals and even adopt a showcase project funded by yourself under the guidance of a mentor to add to your CV. This helps get you noticed by peers, academia and employers in good measure.

81% of data science professionals hold a Bachelor’s degree, 46% come with a Masters and around 20% of professionals have a PhD. Certifications add more credibility to the working professional’s profile.

AI is a technology platform, and technical it must get at some point. Thorough working knowledge of programming concepts, (especially object-oriented) lays the foundation for your entire technical skillset. Almost all would agree with Python being the language of choice of AI development models worldwide. But it doesn't end there. Coupled with programming languages, some specific areas of mathematics and statistics are also a part of the must-have mix.

These Include, But are Not Limited to:

Python - The darling of AI engineers worldwide, Python is widely regarded as one of the easiest programs to learn, combined with some of the most advanced capabilities in solving machine learning and artificial intelligence problems. Python comes with libraries and code snippets that can be easily implemented for the most complex tasks. These include NumPy, PyTorch and a whole host of others.

Java - While not as popular as Python in AI, java is a widely used programming language and its DL4J (Deep Learning 4 Java) library is today among the most popular enterprise machine learning solutions. In fact, it is popular among students as well, for its ease of use.

R - The originally statistical programming language is increasingly becoming popular for handling large datasets and scaling up AI in enterprises worldwide. R packages for AI include Keras, Infer and a whole host of others.

C++ - Typically used for higher level functions in combination with Python as a hybrid system. It can be especially useful to create new applications. Using C++ accelerates the programming process.

How much does an AI Engineer make?

What are AI Engineer’s Job Responsibilities?

As an AI engineer your job responsibilities will include:

Your day to day tasks will include:

Top Companies in the Race to Hire AI Engineers:

AI Software Engineer is one of the most popular job roles among the mushrooming AI vacancies. Current AI Engineer vacancies are jutting out in:

China, with its ambition to become the AI superpower by 2030 and its current position as a global leader in AI, leads this race. The US, with its firmly rooted tech-culture, is bracing-up to give tough competition to China. UK, Canada, Germany, Russia, and India are next in line. Summing down, here’s the roadmap to successfully launch your career as an AI Engineer: 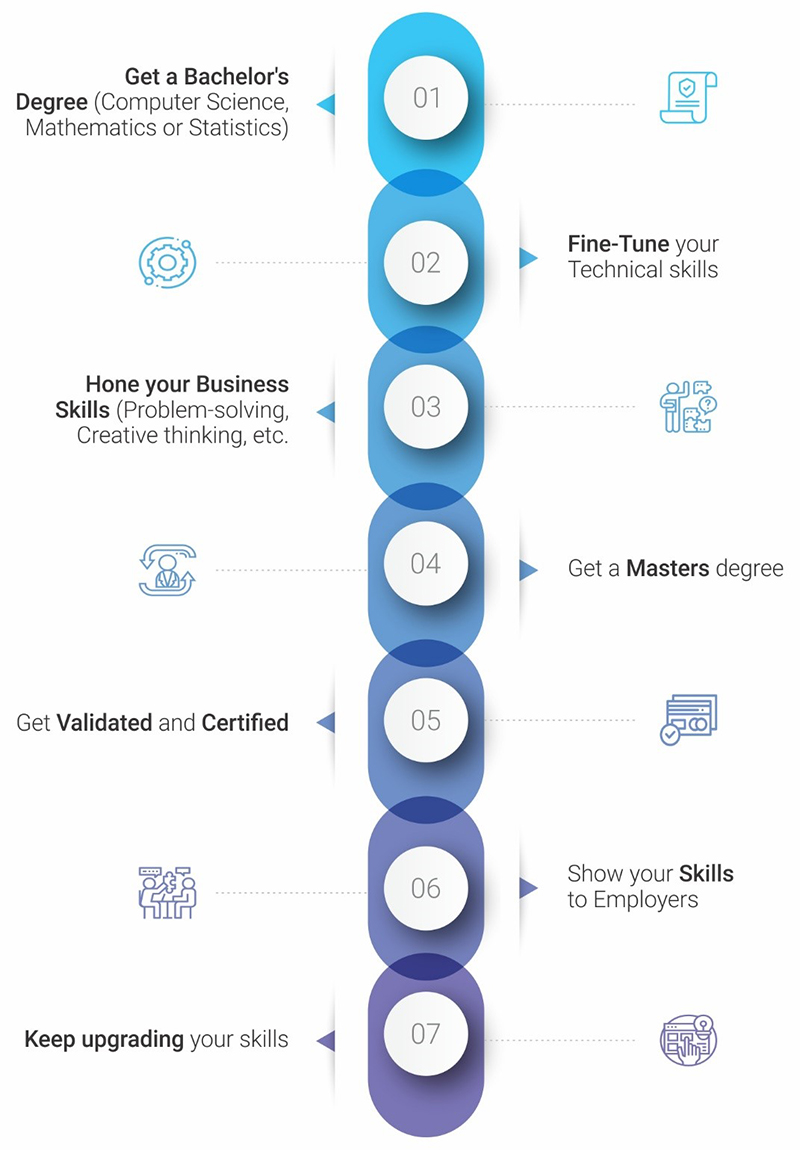 Artificial Intelligence is on the verge of being democratized, which is also a testament to its popularity and the increasing reliance of governments, enterprises and businesses of all sizes and locations on this science. Gain the necessary leverage to make it into this exciting new domain with the world’s only single point certification in Artificial Intelligence. Get certified and get ahead as an AI engineer for your future.

Sign up for the ARTIBA newsletter and get the latest blog updates straight to your inbox.